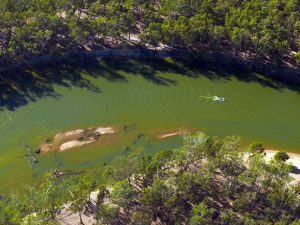 The Murray Lower Darling Rivers Indigenous Nations (MLDRIN) has rejected the report of a Select Committee into the Murray Darling Basin Plan as an insulting waste of taxpayer’s money.

The report, released on the 17th March , coincides with national Close the Gap Day and comes as Traditional Owners and local communities face the cultural and environmental impacts of a blue-green algae outbreak along the River Murray.

‘As traditional custodians, we are deeply worried by the state of the Basin’s rivers and waterways. Our rivers are telling us that the Country is sick.’ MLDRIN Chair and Ngintait man Darren Perry said.

‘We need adequate environmental flows to ensure that our wetlands, native fish, birds and forests can survive and flourish. We need cultural flows to sustain our communities, build resilience and wellbeing. The Select Committee’s report does nothing to address the rights and interests of Aboriginal people,’ Darren Perry said.

‘Many of the recommendations represent a direct attack on our cultural traditions: for example the proposal to consider a reassessment of the Coorong’s Ramsar listing from a fresh water system to an estuarine system,’ said MLDRIN Director and Ngarrindjeri Delegate Grant Rigney.

‘Ngarrindjeri people are closely involved in the management of this key icon site and were recent recipients of the Australian RiverPrize. The committee could have learned much if they had bothered to ask questions of the Ngarrindjeri delegate who attended one of their hearings,’ Grant Rigney said.

Even worse, the Chair of the Committee Senator David Lleyonhelm, has shown his true colours with insensitive and racist remarks during a speech on the Close the Gap report in recent weeks. We are deeply concerned that elements of the Committee were biased against Aboriginal people from the get-go,’ Mr Rigney said.

As a peak Body representing Aboriginal people in the Basin, MLDRIN urges all level of Government to comprehensively reject this flawed and biased report.