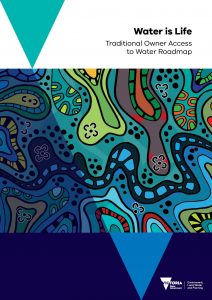 Building on our work in supporting Cultural Water for Cultural Economies (2019-21), MLDRIN partnered with DELWP and the FVTOC to deliver Water is Life. Most importantly, we are proud to have worked closely with Traditional Owners across Victoria to develop their powerful Traditional Owner Nation statements and ensure that their voices shaped Water is Life.

MLDRIN welcomes the ground-breaking truth-telling in Water is Life. Mr Kennedy said, “the Victorian Government’s acknowledgement of aqua nullius and commitment to a restorative justice approach moving forward goes some way to acknowledge and recognise the unceded sovereignty and inherent rights of Traditional Owners (including to water). These are important first steps.”

Historically, Traditional Owners have been excluded and overlooked in government policies and contemporary water management. Water is Life is a welcome conceptual shift with the potential to amplify Traditional Owner voices and cultural obligations in decision making. While MLDRIN is cautiously optimistic about this shift, any associated reforms will take time and, therefore, ongoing attention and support.

MLDRIN encourages the Victorian Government to maintain the momentum generated through Water is Life now moving to its implementation. This includes, but is not limited to, funding to support further water returns (especially in the overallocated northern systems) and sustained resourcing to empower Traditional Owners to determine how and when to benefit from water.

MLDRIN and Traditional Owners of Northern Victoria welcome more meaningful and effective partnerships with DELWP to implement and progress Water is Life. These must be underpinned by clear and open communication, and a shared long-term vision. MLDRIN acknowledges DELWP’s commitment to establish a Water is Life implementation oversight committee (including one representative from each Traditional Owner group) with a direct line to the Minister. This should complement ongoing partnerships with sovereign First Nations across Victoria irrespective of legal standing.

Water is Life sets a new standard for future government engagement, negotiation and partnership with Traditional Owners across Victoria, with lessons for other Basin jurisdictions. With genuine investments and partnerships, clear reform pathways to embed First Nations interests and rights in policy and legislation can become an established norm.